Jakarta, June 9, 2017 – In the event of Breaking Fast with Reza Rahadian which took place at Sheraton Gandaria Jakarta. The event was attended by bloggers, media and fans of Reza Rahardian named PilaRez. The atmosphere of the Sheraton Hotel Ballroom in Gandaria City was already crowded before the event began. Why? Because the guest star in the show is Reza Rahardian. Reza Rahardian’s fans cheered as their idol stars came.

Alinna Wenxin, Brand Manager of OPPO Indonesia said,”We are very proud to be launching a special edition device by partnering with Indonesia’s leading actor who is also our Self Expert Member, Reza Rahadian. Reza was chosen because of the commitment and hard work shown in every performance he presents, the same principles and values ​​we always emphasize in every product we offer to the people. We are confident that this latest device will be well received and receive positive response from the people of Indonesia ,”

F3 Reza Rahadian Limited Edition has a solid black color with laser engraved Reza Rahadian signature carved on the back. In addition, what makes it special is that every consumer who purchases this device will also get prizes in the form of exclusive gift boxes containing collectible items like Reza Rahadian agenda, magnet and postcard special Reza Rahadian.

As the Selfie Expert Member selected in this edition, Reza Rahadian himself responded positively to the presence of this device. Reza is very concerned about the presence of a device that can record every moment of togetherness with all the crew and other players with a group of selfie.

As a “Selfie Expert – Dual Selfie Camera” the OPPO F3 brings the advantages: 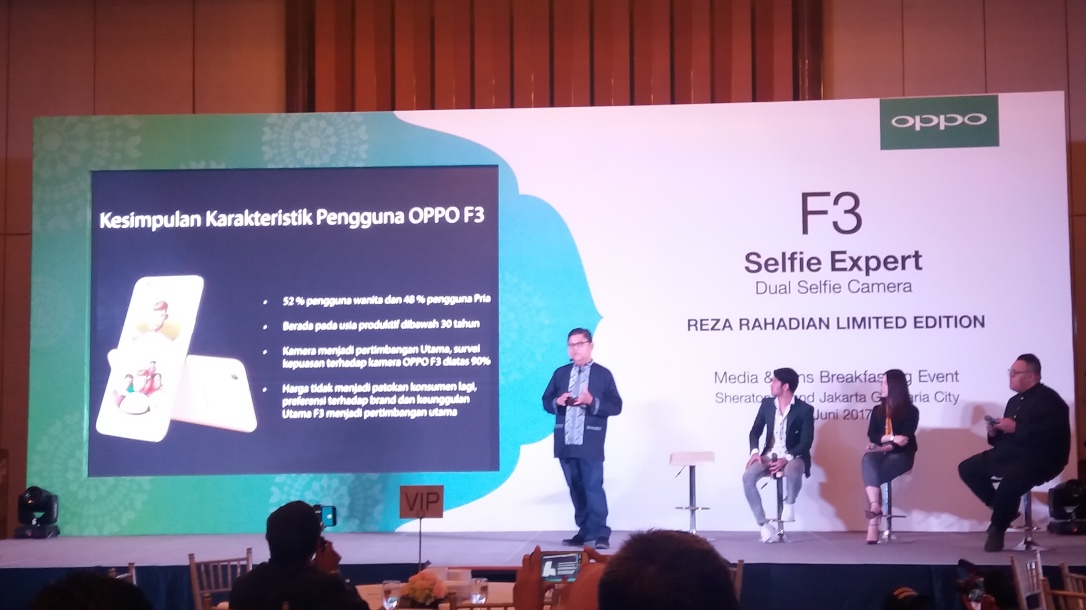 Media Engagement of OPPO Aryo Meidianto A said that over the past 10 years, OPPO has been focusing on the development of smartphone cameras, through technological breakthroughs with innovations in mobile photography. OPPO started the selfie era with facelift features, and was the first brand to launch a smartphone with a 5MP and 16MP front camera. OPPO is also the first brand to introduce automatic rotating camera, Ultra HD features and 5x Dual Camera Zoom technology. The Selfie Expert F Series launched in 2016 drive the selfie trend in the smartphone industry.

By 2016, OPPO is ranked # 4 smartphone globally, according to IDC data. And today, OPPO provides the best smartphone photography experience for over 100 million customers from young people around the world.

According to OPPO’s internal team held a survey on May 2017, with 500 respondents spread across Sumatra, Jabodetabek, Kalimantan and parts of Eastern Indonesia. Users of OPPO F3 are divided into 48% male and 52% female, with 75% percentage under 30 years old / productive age. Consideration buy OPPO f3, as much as 40% consider the front camera, only 2% consider the price. Based on that survey, 91.96% of consumers are satisfied with OPPO F3 front camera, while 94.35% of consumers find this feature very useful.

View all posts by indahijpratiwi